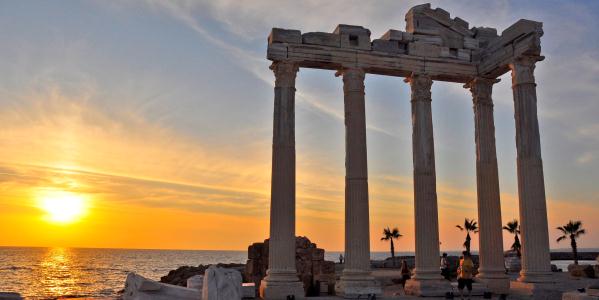 An ancient Greek city hugging the southern Mediterranean coast of Turkey, Side is now a popular resort town and one of several notable archaeological sites in the region.

First mentioned by Strabo as being founded in the 7th century BC, Side is located on the eastern part of the Pamphylian coast, roughly 78km from the centre of the city of Antalya. The ancient city is situated to the north.

Side is the ideal destination for tourists looking for a blend of old and new Mediterranean culture: to the west, hotels, beaches, watersports and, to the east, a more secluded and local experience.

A visit to the ruins of the Temple of Apollo in Side is an experience that won’t be quickly forgotten. Located on a promontory by the sea, these ruins are renowned for their romance and history.

Rumoured to the be the site where star-crossed lovers Anthony and Cleopatra first met, Anthony is said to have presented the temple as a symbol of his devotion to the doomed queen. Apollo was the god of light and music and a fitting patron to their love.

In reality the temple was probably established in the 2nd century AD some two hundred years after the joint suicide of Anthony and Cleopatra following their disastrous campaign against the young Octavian who was to become Emperor Augustus.

Across the bay from the Temple of Apollo is the Lighthouse Club, attesting to the unique fusion of old and new found in Side. A complex of bars, restaurants and a fully-fledged nightclub with DJs, the Lighthouse Club is the place to be for party-goers in Side.

There are professional dancers suspended from the ceiling of the main nightclub area and many balconies and booths overlooking the illuminated harbour. However, because of its status and location you can expect to pay a little more than usual for food and drink.

Side Museum is as impressive as all the museums in this historic region of Turkey. Located in the historic agora baths dating from the 6th century, the museum is based around the findings of Prof. Arif Mufid Mansel during the period of 1947-1967.

It hosts multiple galleries and some special exhibitions from a host of cultures which reflects the historic diversity of the region: Hellenic, Roman, Byzantine and Islamic originals, torsos, temples, portraits, weaponry and more line the walls of Side Museum.

All visitors to Side make a trip to the Nymphaeum, a monumental fountain situated in outside the citadel. A remarkable three stories high, the Nymphaeum is in a somewhat dishevelled state, having had its marble ornamentation ransacked from the upper section of the structure.

In its original state the fountain would have been 15 metres high. Today, many of the statues and reliefs belonging to the Nymphaeum are held at Side Museum, and so a day trip that incorporated a trip to both sites would work nicely.

• Manavgat Waterfall on the Manavgat River lies 3km north of the town of Manavgat, itself a short distance inland from Side.

• Apollo Temple, Side’s most famous and most photographed landmark is the 2,000 year old Roman Temple of Apollo is situated at the Eastern tip of the peninsula near the harbor.

• The Old Street in Side is near the amphitheater. The ancient columns are well preserved here. This place is a historical place in Side.

• Pamukkale also offers a Spa bath right next to the viewpoints.

• Parasailing is an activity which is offered at many places along the beaches of Side.

(This page was viewed 157 times today and shared 1 times)