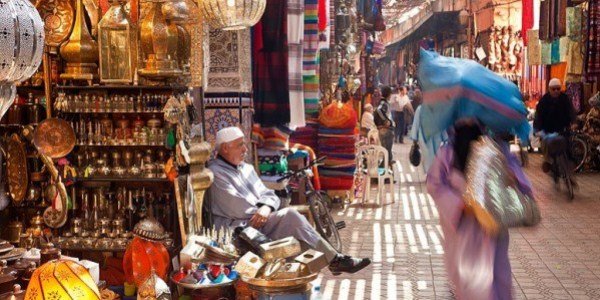 Located on the northern edge of the snow-capped Atlas mountains, Marrakech is the unofficial capital of Morocco. The natural ‘first stop’ on any tour of the country and a popular tourist destination in its own right,

Marrakech is serviced by a large airport a short drive away. With its towering minarets and bustling medinas crammed full of exotica, Marrakech is a great place to take yourself or your family, preferably between March and June when the weather is a little cooler.

In the heart of Marrakech’s medina quarter stands Koutoubia Mosque which is the largest to be found in the city. The minaret, 77 metres high, was inspired other famous structures including the Giralda in Seville, Spain. If you’ve ever seen any pictures of Marrakech before visiting this is the tower that dominates almost every shot.

Beautifully illuminated in the evening, it is only a short excursion as non-Muslims are unable to actually enter the mosque. Be sure to listen out for the Muezzin’s call to prayer from atop the minaret in the evenings.

El-Badi Palace, meaning ‘The Incomparable Palace’ in Arabic, is situated in the heart of Marrakech and is thus ideal for tourists on foot, or those unwilling to stray too far from the city in search of things to do.

Now a ruin and well-known tourist attraction the construction of El-Badi was funded by a substantial ransom paid by the Portuguese following their disastrous defeat at the hands of the Moroccans in The Battle of the Three Kings.

If you’re looking for a slice of history and culture then this atmosphere palace, with its crumbling forecourts, overgrown foliage, and roosting storks is the ideal spot. Rumour has it that it once housed a harem of 365 girls: one for every day of the year.

You’ll find an accommodating museum, containing an original twelfth-century minbar once housed in Koutoubia Mosque. With an upfront fee of 10 dirham (current rate), it’s a bargain.

The Sadiaan tombs were first discovered in 1917 and later restored. With many of its original features intact the Sadiaan tombs make for an ideal retreat: ornate arches, intricate and colourful tiling, verdant gardens and even a few little tortoises wending their solitary way.

The beautiful mausoleum houses the bones of around sixty members of the Saadi Dynasty, a powerful Berber family which ruled Morocco between 1554-1669. Like many of the attractions in Marrakech if you avoid getting stung for an overpriced tour guide you may be able to negotiate a great price on this.

If the heat and energy of Marrakech’s medina quarter becomes too much retreat to the Majorelle Gardens just a little way outside the old town. Once you’ve arrived you’ll feel like you’re a world away from the bustle of the city.

There are all kinds of exotic flora and fountains of blue stone. Taking your time to enjoy the shade, the whole trip should take around an hour. However, if you intend to visit the museum there then allow yourself a little longer.

Marrakech really comes alive in the evening as the daytime market stalls make way for food stalls and entertainment. Time this right and you can sit in rooftop bar or restaurant and watch the transformation take place.

A word of warning though. As the square gets really crowded watch out for pickpockets and bag snatchers; keep your possessions safe.

• Djamaa Al Fna, (UNESCO World Heritage Site) and the souks, the main haunt for tourists in Marrakech, this huge historic square is a great introduction to the architecture and life in the city.

• The Koutoubia Mosque, the largest mosque in Marrakech, dates from the 12th century and is located just off Djamaa Al Fna Square.

• Bahia Palace, built in the late 19th century it was supposed to be the greatest palace of its time.

• Saadian Tombs from the 16th century are almost exactly as they were left 400years ago.

• Visit Atlas Mountains on a day trip from Marrakech. It’s the perfect opportunity to get away from the heat and eat some fresh cool air.

(This page was viewed 129 times today and shared 1 times)