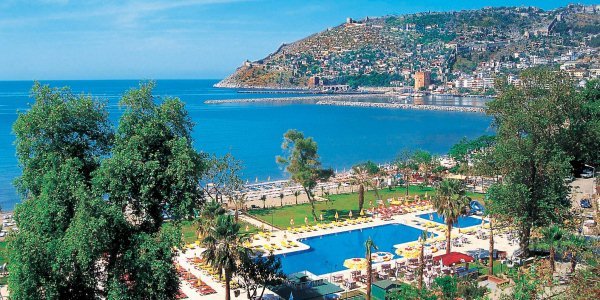 Alanya, formerly known as Alaiye, is a popular beach resort city on the southern coast of Turkey. Around 138 kilometres from the larger city of Antalya, Alanya has a current population of 98, 627.

Due to its strategic geographical location on a small elevated peninsula of the Taurus Mountains on the Mediterranean Sea, Alanya has plenty of history, having been a stronghold for just about every big name, from the Seleucids and Byzantines to the Romans and Ottomans.

For this reason, be sure to visit landmarks such as Kizil Kule (the ‘Red Tower’) and Alanya Castle to get a feel for the history of the place.

Once a quiet and forgotten town, in recent years Alanya has bloomed into a vibrant and diverse tourist area with most of its clientele arriving from the Netherlands and Scandinavia.

This means that the nightlife is pretty wild and, if you’re looking for some fun, be sure to visit the downtown area which has gained a reputation as ‘Vegas by the Sea’. Whether you’re visiting Alanya for a quiet beach holiday or a historical trip, you can expect to unwind in the many nightclubs of the downtown district.

High above the sprawling bars and nightclubs of Alanya’s downtown district stands the impressive Seljuk Sultanate-era castle which boasts views across the city and out onto the surrounding countryside and mountain rage.

The stronghold was gradually developed over time so as you go deeper into the structure. It is as if you are travelling deeper into history. The inner fortress contains a substantial though poorly preserved ruin including an 11th century Byzantine church.

To get to Alanya Castle either catch a bus from Hurriyet Meydani at an Hourly (current) rate of 1.25 Euros or splash out on a taxi and expect a fare of around 15 Euros, which is still quite reasonable.

Kizil Kule, which means ‘Red Tower’, is an imposing five-storey defensive tower of more than 30m in height. Constructed in the 13th century by the Seljuk Sultan Alaeddin Keykubad, who also built Alanya’s castle, it was unsurprisingly the first structure the Sultan erected once he had seized the town from the local Armenian population.

Kizil Kule is considered to be a symbol of Alanya and appears on the city’s flag; it also made an appearance on the Turkish banknote. Kizil Kule is only a short distance from the centre of Alanya, towering over the end of the harbour which it was originally built to protect.

If you’re all about views and taking photographs, then you’ll want to walk down to Alanya Shipyard. A reasonable walk down from central Alanya, the shipyard is of historical and natural interest.

There is a small fee to enter the reconstructed shipyard, in which you can learn about the long history of seafaring in the area. But the real attraction is the view over the coast.

• Kleopatra Beach Just near the Seljuk castle near the history… Like a piece of heaven.

• Alanya Kalesi (Castle) offers breathtaking views of Alanya. You can also pass through to the actual castle; a well worth walking in the winding road and hair pin bends to the top.

• Red Tower is an excellent historic attraction. The building is very interesting and well preserved. Beware the steep steps but the views from the top are great.

• Dimcay is a calm and peaceful place perfect for relaxing in the mountain. You can even rent jeeps.

• Alanya Shipyard is a beautiful harbor below the castle invites for romantic evening walks. It is located next to the Keykubad beach in the center of Alanya.

(This page was viewed 103 times today and shared 1 times)