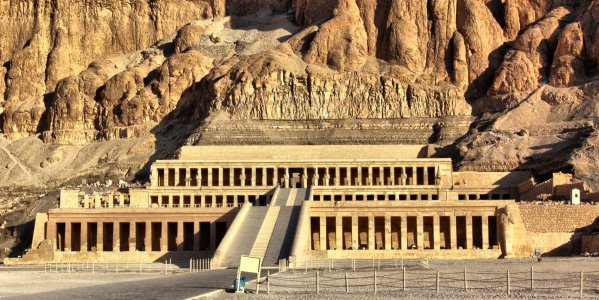 South of Cairo, Luxor is slightly less well-known than the capital but arguably full of even more storied history with the Valley of the Kings and the Valley of the Queens immediately opposite the main conurbation, just across the Nile, in the Theban Necropolis.

Thousands of tourists visit every year for the monuments, but there is also much more to discover in this city of 487, 896 people. Despite its position on the Nile, it gets extremely hot in Luxor during the summer (the record average for the year is 48.5C).

For this reason, it is recommended that you plan your trip for the spring or autumn months.

Luxor Temple dates from around 1382 BC and is one of the best preserved ancient sites in Egypt. The temple is remarkable for having been a continuous site of worship for almost its entire history, first as a Coptic church and then later the mosque of Sufi Shaykh Yusuf Abu al- Hajjaj.

The highlights of the temple are undoubtedly the Avenue of the Sphinxes, the Ramesses II Collosus and the red granite obelisk. There is a small fee to enter the temple and you can expect to find multilingual guides at the site.

The souks (markets) of Luxor are but a short distance from sites like Luxor Temple and provide some of the most vibrant, exotic and rewarding shopping experiences in Egypt and the Middle East generally.

You’ll be able to find great bargains and, unlike other souks in North Africa, you are unlikely to be pestered by the shopkeepers. Remember to look out for Aboudy Book Shop while you’re there with its sprawling collection of books and memorabilia.

It is a dream come true for many to visit the Valley of the Kings. Housing many of Egypt’s pharoahs the valley was used as a burial site for some 500 years between the 16th and 11th centuries BC.

Perhaps most famous for the tomb of Tutankhamun and the curse that is rumoured to have fallen upon those who first opened it, the Valley of the Kings remains a constant site of excavation and conservation, and a new tourist centre has also recently opened there.

If you’re intending to do a tour of the valley from your accommodation in Luxor be prepared for a long day starting around 5.00am (to avoid the heat) and continuing on until the afternoon. Many of the tombs are not open to the public but there is still plenty for the most fanatic of Egyptologists.

You’ll find Sindbad Hot Air Balloons west of the Nile, near Al-Assif. Considering the views around the area (the Valley of the Queens was known as ‘the place of beauty’ in ancient times) it is no surprise that hot air ballooning is one of the best things to do during your time at Luxor.

Sindbad Hot Air Balloons is one of the more established companies and they will pick you up from your hotel and take you to their premises free of charge. They also produce a DVD of your individual trip which you can purchase afterwards as a memento.

• The Luxor Temple was dedicated to the Theban Triad of the cult of the Royal Ka, Amun, Mut, and Khonsu and was built during the New Kingdom.

• Valley of Kings is the place where pharaohs were buried in hopes they would return to their Gods in the afterlife. King Tutankhamen tomb was found here in the 1920’s almost untouched.

• The Mortuary Temple of Hatshepsut, located beneath massive cliffs near the West bank of the Nile, is dedicated to Amon-Ra, the sun god.

• You get to the Karnak Temple and it’s dark. There are hundreds of people waiting for the Sound and Light show to start.

• Memnon’s Colossi, these two big statues is what remains from Amenhotep’s temple built in the 14th century BC.

(This page was viewed 142 times today and shared 1 times)