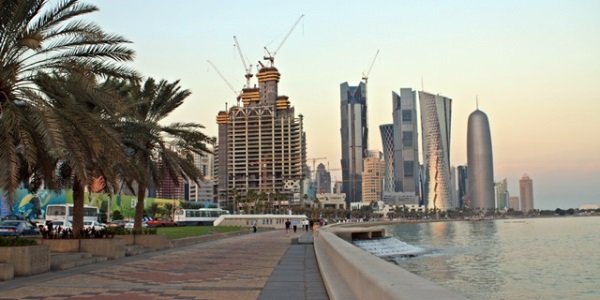 Doha, on the eastern coast of Qatar facing out into the Persian Gulf, was founded in the 1700’s based on pearling and trading industries. A vibrant modern city with quick access to water activities and the desert.

The nearest international airport located 9km southeast of Doha is Hamad International and opened on April 30, 2014.

This is the area known as the Arabian Gulf, characterised by high temperatures and humidity, it will not let you down. Daytime highs in summer of 38⁰C and often approaching 45 C, with winter temperatures as low as 22⁰C. Hot desert climate almost no rain in summer but has 75mm (2.95 in) per annum rain which falls mostly between Oct to Mar.

When Qatar became an independent Araba state in 1971 as part of the now United Arab Emirates, Doha was firmly established as the capital city. This is a University and port city with a busy tourist waterfront and boating marinas. Oyster monument on the Corniche (sea wall, foot path) is there to remind all who see it of the great pearl industry that founded this city.

The city of Doha and its surrounding area has a large selection modern luxuriant hotels and resorts, furnished apartments and family run accommodations to suit all budgets. You can sleep in the air-conditioned luxury of large opulent hotel rooms or the intermit privacy of your own rental apartment. Qatar, with Doha as its capital, is a modern community but as a strict Muslim country you must respect their religious laws and you will enjoy your stay.

As in many oil rich Arab nations you do not just go out to eat but you go out for the experience of a different world. There are many restaurants that cater to all budgets and dietary needs. But you will find that they all have one thing in common, the eating area and furnishings are out of this world.

The atmosphere that they create and the service that the staff provide transports you to the opulence of the desert sheiks and the stories of Arabian Nights. As with the food, it seems that in Muharraq you can’t just have a coffee when you go into a coffee shop you get a coffee experience the only Arabia can supply.

As an Islamic country there is little in the way of public night life. Most of the hotels have a lounge where an alcoholic drink can be discreetly enjoyed and a few, such as the Mewreb Hotel with its Cloud 9 night club and the Pa Paloma at the Intercontinental Hotel, host DJ’s and live music.

• Spend a day touring the many desert and gulf forts and museums that surround the original city and learn of the ancient civilisations that first established a human presence in this part of the world.

• Go shopping in the traditional Souk’s or modern market places. You go to experience it but buy only if you want to.

• Investigate into the Arts, Culture and Religion of the Area. Make a start with The Museum of Islamic Arts.

• Walk the Doha seawall during the day and again at night. It is known by its traditional Arabic title of the “Corniche”. This wide road with shops hotels and coffee houses on one side and a wide paved walking area by the see wall that overlooks the marinas on the other.

• Book a cruise on a “Dhow” (local sailing vessel). You leave the Pearl islands and slowly cruise your way to the Doha Corniche, view the skyline of Doha and see the Oyster monument.

• Take a desert safari into the desert where inland sea meets the sand. This is a 4X4 drive that is exhilarating and fun.

• Al Maha Sanctuary and its 1000 protected Arabian Oryx, the symbol of Qatar. These desert deer are actually white antelopes with two to three feet long horns having a distinctive spiral running down the length of them.

If you are visiting or working in the area, Doha is a destination that you should not miss. It captures the historic past and future of an area that has seen such rapid change. Don’t let opportunity pass you by.

(This page was viewed 139 times today and shared 1 times)