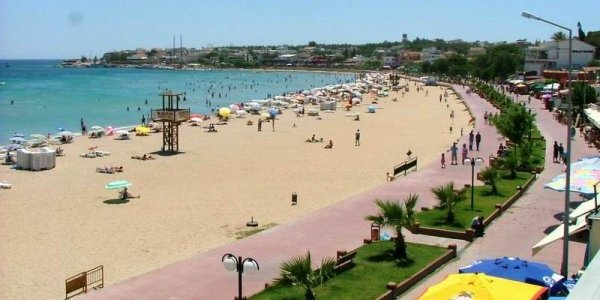 Didim is a small town in the district of Aydin Province on the Aegean Coast of Turkey. Until 1997 the town was called Yenihisar. The name was changed as the holiday traffic increased to remove confusion with other towns in Turkey.

Getting to Didim Altinkum can be an adventure on its own. You have two options for international airports; flying to Bodrum Airport (97km by road) or Izmir Airport (160km by road).

In summer, there are direct flights from major European airports to Bodrum Airport, and also direct flights to Izmir Airport all year round. Then you have to either rent a car or get the intercity coach from the main bus terminal located in each city.

That requires getting from the airport to the bus terminal. There are good connections but check details before your departure.

The climate in Altinkum can be described as Mediterranean with hot summers and little rain coupled with mild winters. Mediterranean winters while considered mild to the people of northern Europe, are considered cool for those that live there all year round.

The town of Didim- Altinkum boasts modern hotels to suit all budgets, and guest houses.

There are plenty of restaurants over the road from the beach to suit all tastes, and enough bars along the promenade to provide you with a choice of a relaxing afternoon drink or an all-night party.

Didim- Altinkum has a number of discothèques, smaller bars, and clubs, some with live music, (mostly Turkish folk music).

The miles of golden beaches, the availability of the many water sports both above and below the safe clear blue waters of the Aegean Sea coupled with the historic ruins dating back to the Bronze age, make this the destination of choice for sun seeking holiday makers who are prepared to put a little effort into getting there.

The beach is clean with easy access, from the promenade there are wooden walk ways out over the sea that rent with sun beds and umbrellas. The sand is clean and soft underfoot; you can walk out in the beautiful clear waters of Aegean Sea and gentle shelving sand for about 100 meters. The beach is safe for all ages.

Water sport rental and boat rides to secluded bays are available for hire from the beach. The crystal clear blue water and golden sand makes it good for snorkeling.

For those of us interested in a little history, there are historic sites within and surrounding the resort or a short drive out of town on safe road with friendly local people. The area has been populated since the 16th century BC.

The Temple of Apollo was rebuilt after Alexandria the Great’s victory over the Persians is nearby. Didim- Altinkum is also close to a number of other ancient towns and natural formations, such as Lake Bafa national park, and historic sites like Miletus and Priene, dating back to the 6th Century BC.

This is a beautiful part of Turkey. Good beach, plenty of restaurants and bars along the promenade. Locals are happy friendly people. You really will enjoy it here!

• Apollo temple the columns; Standing amongst these columns are extremely intimidating and really makes you feel small.

• The fragment Head of Gorgon dating back to 2nd Century AD is probably the best known item of the Turkish cultural heritage.

• The Miletus Theatre was first erected in the 4th century BC and it has taken its present form by later alterations undergone in the Hellenistic, Roman and Byzantine periods.

• Visit Soke Market, its massive and lots of Bargains on offer, the Gold shops there are also cheaper than in the resorts, we picked up some real bargains.

• Go to the beach. The beaches are lovely and the water even better.

(This page was viewed 164 times today and shared 1 times)