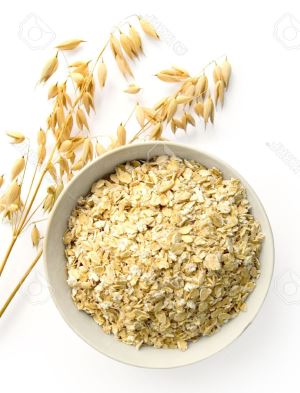 More commonly referred to as the common oat, it is a cereal grain that comes from a species of grass known as Avena sativa.

The oat is rare sold for human consumption in its harvested state but is used mostly for livestock feed. It’s sold as steel cut, instant roast or roll cut.

Whole oat groats – These are harvested oats which have been cleaned and the inedible hulls removed. They take the longest to cook and have the most nutrients.

Steel oats – These are whole groats cut into large pieces. While they also take long to cook, they retain most of the nutrients.

Rolled oats – To make rolled oats, the groats are steamed, and then rolled out and flattened. The bran is not retained.

Instant oats – These are similar to rolled oats, except that they are precooked, and flavourings added to sweeten them.

Where did oats originate from?

Oats are believed to have originated from Somewhere in Asia and then spread to Europe. They were mostly used for medicinal purposes. Oats are mainly cultivated in Europe and North America, with less than 5% of the total production going to human consumption. Most of it is used for animal feeds.

Oats have been used for thousands of years for medicinal purposes for conditions such as:

Acne – Boil oatmeal until it softens and then give it a few minutes to cool off. Apply the oatmeal on the acne affected area and leave it on for fifteen minutes, then rinse it off.

Besides being wonderful as a skin moisturizer, oatmeal is a natural skin lightener and is usually used as an ingredient in many skin lotions and creams.

Oatmeal is also great as a soak in your bath water. To use it in your bath, grind half a cup of uncooked rolled oats with a food processor. Wrap the resulting powder in a cloth and drop it into your bathing water.

Another way to incorporate oats into your beauty regime is to make a face scrub. To make the scrub, mix a third of a cup of oatmeal with half a cup of hot water. Then add a teaspoon of honey and a teaspoon of yoghurt. Apply to your face, except near the eyes, and leave it on for twenty minutes. Wash it off with cool water.

Do this several times a week and any irritations on your skin will disappear, leaving it smooth and moisturised.

The common way of eating oats is by making hot porridge and bread products, however there are other numerous ways of incorporating oat into your diet such as:

Smoothies made from oatmeal have the added advantage of being thicker and more filling, not to mention the low calories in them. Have half a cup of prepared oatmeal and the same amount of low skimmed milk. Add a couple of your favourite fruits and honey to taste and blend this together to make a smoothie that will keep you energised for hours.

For this recipe, you can include sliced bananas to give the baked oatmeal more flavour. Mix two cups of rolled oats, a tablespoon of baking powder and a quarter teaspoon of salt. In a separate bowl, mix a mashed banana, a beaten egg, one and a half cups of milk and a teaspoon of vanilla.

Mix the contents of the first bowl and the second one. Then pour it out into a baking pan lined with parchment paper. The oven heat should be heated to 375. Let the batter bake for twenty

Prepare the ingredients as you would for the normal burger and then add 400grams of mashed beans and 75 grams of oats. Fry or bake the burgers the usual way. In addition to a tasty meal, you’ll have the extra fibre and nutrients in your burger.

Fry onion and garlic until brown and then add chillies, coriander leaves and curry leaves. Let them simmer in water for two minutes and then add your oats, about a cupful. Stir and let it cook for five minutes. Your oat soup is ready to be enjoyed.

Reduces the risk of diabetes – Because oat is a whole grain, it contains a lot of fibre and complex carbohydrates. They slow down the conversion of food, thus stabilizing blood sugar. They also contain minerals which aid in the body’s secretion of insulin.

Weight loss – Oatmeal has very few calories yet is packed with nutrients as well as the attractive quality of making you feel full longer. It stays longer in your stomach keeping your cravings at bay.

Protect against heart disease –The fibre on oatmeal has been shown to decrease the bad cholesterol in the body thus reducing your risk of heart disease. In fact, oatmeal is considered one of the five foods which help to combat cholesterol.

Reduce the risk of colon cancer – A diet rich in fibre is recommended for protection against colon cancer. The lignans in oats are also thought to protect against breast cancer and other hormone dependent cancers.

Strengthen your body’s immunity – How your body resists infections and illnesses is dependent on how strong your immunity is. Oats contain the fibre, beta-gluten, which helps white blood cells detect infections faster and also to eliminate the bacteria faster.

Aids in digestion – By incorporating oats in your diet, you ensure that your gastrointestinal health is maintained and you eliminate conditions associated with digestion such as bloatedness and irritable bowel syndrome.

Boosts your energy – Oats are rich in proteins and carbohydrates which are digested slowly by the body. They are particularly useful for people who work out because they give the muscles the energy required throughout the workout.