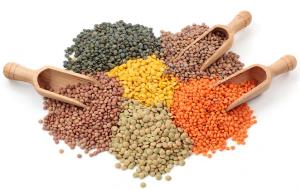 Lentils are a member of the legume family and come in several varieties such as red, brown, green and yellow lentils. They are shaped like lenses and are enclosed in a husk which can either be removed or kept on. Like other legumes, they grow in pods which contain one or two lentils each.

Lentils, though cheap in price are one of the healthiest foods, packed with loads of nutrients such as protein, fibre, Vitamin B1, pantothenic acid, folate, manganese, zinc, potassium, Vitamin B6, iron and many more adding up to over eighty different nutrients.

The amount of protein in lentils is comparable to that of fish, red meat and poultry. That makes them a good substitute for meat.

They are also versatile and can be incorporated into a variety of foods, because they easily absorb flavours from other foods.

Where did lentils originate?

The lentil is the oldest source of food and dates back to about 6000 years ago. They are thought to have originated in West Asia and Northern Africa, where they were farmed and eaten for their ease of cooking and their nutrients.

They then spread to Northern India, where even today, lentils are a common substitute for meat in a country where majority of the population is vegetarian.

Rinse lentil in cold water several times ensuring that you get rid of the dirt and small stones. Drain the water and then boil them in water (three times as much water as you would other pulses). When lentils are placed in already boiling water they are easier to digest, as opposed to letting them heat up together with the water.

The boiling time is dependent on the type of lentil, for example:

• For yellow and red lentils, boil for fifteen to twenty minutes. Once boiled, these lentils are wonderful for thickening soups because they form a thick puree.

• For green and brown lentils, boil for thirty to thirty five minutes. These lentils are ideal for casseroles and salads because of their ability to retain their shape even after boiling.

• For Puy lentils, boil for twenty to twenty five minutes. These are thought to taste better than the other types and make a good accompanied to dishes such as fish as well as other meats.

In this way, blood sugar levels remain constant which is important in the control of diabetes.

They are also recommended because they have little starch, which has little effect on blood sugar.

Lentils lack fat and are high in fibre. Like most foods recommended for weight loss, they make you feel fuller for longer, therefore removing the urge to snack on unhealthy foods.

Besides containing beneficial nutrients, lentils contain as little as two hundred and twenty calories per cup.

Lentils are one of the best sources of soluble fibre, which helps to lower cholesterol and fight heart disease.

The legumes also contain magnesium, which helps the flow of blood, oxygen and nutrients through your veins and arteries.

The folate in lentils helps to lower the levels of an amino acid known as homocysteine, which damages artery walls and has been identified by researchers as a risk factor for heart disease.

Lentils give you energy

As mentioned earlier, lentils are broken down slowly during digestion, which ensures that you have energy for a long period.

They also contain iron, which transports oxygen throughout the body and is also needed for the production of energy. More oxygen is equivalent to more energy.

Lentils are a good source of folate, which is required for pregnant women to avoid birth defects of the brain and spinal cord in babies.

The folate in lentils also helps in the formation of new cells in your body, helping it work more efficiently.

With their high quantity of fibre, lentils promote regular bowel movement. The insoluble fibre prevents constipation, irregular bowel syndrome and other disorders associated with a poor functioning digestive system. They also absorb a lot of water, thereby carrying a lot of waste out of your body.

Lentils also aid in digestion by combating the acidic effects of fatty and processed foods, and thus promoting the growth of healthy bacteria necessary in the gut for a healthy digestive system.

A healthy gut has been linked to an overall high immunity of your body.

Lentils contain a plant protein known as plant lectins, which has been shown to control the growth of cancer cells.

Studies have also shown that plant proteins, such as those in lentils, lower your risk of contracting cancer.

Lentils are good for people who suffer from rheumatoid arthritis because they help reduce inflammation in the body.

Lentils contain all the essential amino acids required by the body to repair organs, build muscles and ensure the smooth functioning of the body processes.

Atherosclerosis is a disease where your arteries get blocked by fat, cholesterol and other impurities found in blood, such that they are unable to carry blood to and from your heart.

Over time, your arteries get narrower, leaving you susceptible to heart attacks and strokes. Consumption of lentils helps to decrease the chances of developing Atherosclerosis.

The potassium present in lentils helps to increase electrolytic activity which helps with the good functioning of the brain. It also helps with the other organs of your body such as the kidneys and the heart.

Lentils are an anti-aging food in that they are rich in copper which helps in making the connective tissue and the skin pigment.

(This page was viewed 552 times today and shared 1 times)