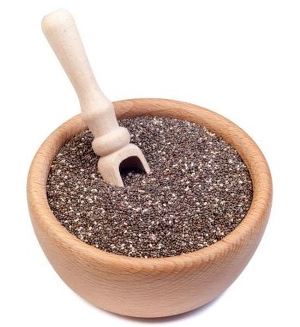 Chia seeds are small black or white seeds that come from a flowering mint plant family known as Salvia hispanica.When soaked in a liquid, they take on a gel like appearance.

You can find them in your local health store or in supermarkets. In the last few years, the inclusion of Chia seeds in people’s diet has increased due to their powerful nutritional composition. They contain more dense nutrients than any other food.

They contain fibre, antioxidants, minerals, omega 3 fatty acids and protein, Vitamins B, B2 and B3. Chia seeds are grown organically and contain no gluten, as is common with whole grain foods.

Where did Chia seeds originate?

Chia seeds were grown and used during the Aztec and Mayan cultures in Mexico and Guatemala. The Aztecs believed that the seeds had supernatural powers and their warriors ate them for the high energy and endurance the seeds gave them.

In Mayan language, the name Chia translates to ‘strength’.

The Aztecs were right in their belief that Chia seeds are energy giving. This is because they are packed with energy giving nutrients. The best thing is that while they give you energy, they don’t affect your sleep at night.

Protect the skin from premature aging

Chia seeds are one of the foods that contain the highest number of antioxidants. Antioxidants destroy free radicals, which are the cause of ageing. If not arrested, these radicals cause inflammation and damage to the molecules of the cells and contribute to ageing.

We all know that fibre is important for the body to carry out digestion. The problem with most sources of fibre is that they contain a lot of carbohydrates which are packed with calories.

Not so with Chia seeds. An ounce contains 11 grams of fibre, meaning that one serving can take care of your recommended daily fibre intake.

Chia seeds have the ability to make you feel full and satisfied for a long time. This is because of their nutritional composition of proteins, nutrients and omega 3 fatty acids. The fibre in Chia seeds, when mixed with a liquid, expands in the stomach making you feel full and slowing down the absorption of food.

Helps to fight some types of cancers

Chia seeds contain plant lignans, known to reduce the risk of hormone related cancers such as breast, prostate and ovarian cancers. The oil in the seeds reduces tumour growth by inhibiting the multiplication of the cancer cells in the breast.

Improve the health of the heart

Because they contain a lot of fibre, Chia seeds reduce cholesterol and regulate the immune system, thus decreasing the risk of cardiovascular disease. They also lower blood pressure which contributes to the overall good health of your heart.

One of the grim realities of aging is weakened and brittle bones. Chia seeds contain:

Research has shown that Chia seeds help improve blood sugar control and also prevents the onset of insulin resistance. Because they slow down digestion, the blood sugar level in people suffering from Type 2 diabetes remains balanced.

How to use Chia seeds

They can be either eaten whole or incorporated into food. Unlike other nutty type of seeds, Chia seeds do not need to be grounded to be eaten.

However, a word of caution here—Chia seeds form a thick gel when mixed with a liquid. This can pose a problem to people who have swallowing difficulties, as they can obstruct the oesophagus. To be safe don’t give them to small children and also mix them with other foods or liquids.

They can be used to make:

• Chia pudding by mixing a quarter cup of the seeds with almond milk. Wait for the seeds to become gel like and your pudding is ready to be eaten.

• When baking, you can use Chia seeds in place of the eggs. They will increase the nutrient content of the baked foods and will also be safe for people who have egg allergies. Replace the eggs by mixing a tablespoon of Chia seeds with three table spoons of water and let the mixture first rest for fifteen minutes.

• Pre-workout drink which helps with getting rid of feeling bloated. Simply mix the seeds with water and let them sit for a little while. Then drink it

• Blue berry muffins when cooked with Chia seeds don’t alter their taste at all.

• Make your salad even healthier by sprinkling Chia seeds over it. Stir the seeds through the potato or cold salads and you won’t even taste them as you tuck into your salad.

• Prepare your granola bars with Chia seeds. Blend the seeds together with the ingredients for your granola bars, such as oats, honey, dates, and then spread the mixture in a pan and harden it in the fridge. This is for granola bars that don’t require baking.

• Jam or jelly by adding the seeds to pureed fruit. Due to the ability of chia seeds to form jelly when immersed in a liquid, when put in pureed fruit, it forms a jelly which can be eaten by itself or used as a spread for breads.

• Make Chia seed porridge by mixing two tablespoons of Chia seeds to a cup of warm milk. Give then mixture time to form a jelly and then whisk or blend it. To create a flavour, add honey or your favourite fruit.