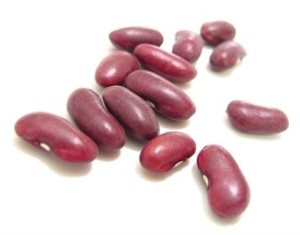 As the name implies, kidney beans are shaped like kidneys and their colour ranges from brown to red. They are a variety of the common bean and are classified as pulses, the foods associated with proteins and fibres, while low in fats.

Be sure to boil kidney beans first, as in their raw state, they contain toxins on their outer skin. Once boiled to rid of the toxins, kidney beans are a good source of:

Kidney beans are available all year round and can be bought dried or canned. They are very popular with many people who use them to cook chilli and baked beans.

The origins of kidney beans

Beans were among the first plants to be cultivated. The red kidney bean originated in Peru and then spread to Central Mexico and Guatemala. They later made their way to Europe in the fifteenth century, carried by Spanish explorers.

The Indian tribes of Central America combines maize and beans to prepare a meal which met most of their nutritional requirements.

The English were the first to use the name ‘kidney bean’ to differentiate it from other types of beans.

To ready the beans for cooking, soak them overnight or for eight hours. This will lessen the time required to boil them. Discard the water used for soaking and wash the beans in clean water.

The kidney beans must be boiled in water for close to an hour to soften their texture and most importantly to get rid of the toxins present in the skin.

After boiling the beans are now ready to be cooked into your favourite recipe, ensuring that they end up with a soft texture.

Kidney beans have most of the nutrients required for a healthy body. The benefits of eating kidney beans are varied and include:

Kidney beans maintain the health of the heart in several ways.

* The folate and magnesium in kidney beans help decrease the amount of amino acids known as homocysteine, responsible for strokes and other cardiovascular complications.

* The fibre in kidney beans when ingested forms a gel like substance which glues to bile (containing cholesterol) and carries it out of the body, thus maintaining the health of the heart.

* The magnesium and potassium present in the beans also helps to maintain heart health by dilating the arteries and veins, improving the flow of nutrients and blood throughout the body.

Kidney beans release carbohydrates into the body slowly, menacing that the rise is gradual, which is important in maintaining healthy levels of blood sugar.

When blood sugar levels are maintained, less insulin is released into the body, which is crucial for people with diabetes.

Kidney beans are also recommended because they contain fibre and protein, and other important nutrients which fill the nutrient requirements of people under medical induced diets.

Protein for a healthy body

Beans are known as the poor man’s meat because they are one of the few sources of plant-based proteins.

The major advantage of plant based proteins such as from beans is that you get the benefits of eating proteins while avoiding the high cholesterol associated with animal sources.

Proteins repair and build tissue, build muscles and many other body processes that are dependent on proteins.

Kidney beans are rich in iron, which helps to give you energy. They are especially important for menstruating ladies, who lose a lot of iron and need it replenished for their bodies to be reenergised.

Haemoglobin, which transports oxygen from the lungs to the body, contains and requires iron in order to do its work efficiently.

Kidney beans are packed with antioxidants, which boost the immune system by destroying free radical in the body which make you susceptible to diseases and infections.

Vitamin B1, present in kidney beans, is known to help in the formation of brain cells and aids their proper functioning. Vitamin B1 also helps with retention of memory. A lack of Vitamin B1 or Thiamin has been associated with an increased risk of Alzheimer’s disease.

Studies have shown that there is a relation between consumption of legumes, such as kidney beans, and the development of colon cancer.

Studies have also shown that the Vitamin K present in kidney beans protects the body cells from oxidative stress, which lowers the risk for cancer.

Red beans contain many antioxidants, which have anti-aging properties. These antioxidants also help fight the damage caused by the environment as well as an unhealthy diet.

Osteoporosis is a condition characterised by weakened bones, which makes them susceptible to fractures. It’s a silent condition in that there are no symptoms, and is only diagnosed by regular fracture of the bones.

Your bones are filled with protein and minerals including calcium. The disease occurs when the levels of calcium decrease.

Phytates are compounds found in beans and when their levels in the body decrease, bone loss occurs, leading to osteoporosis.