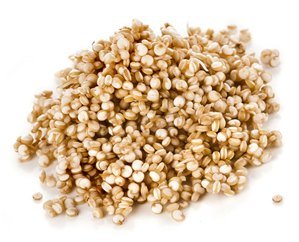 Quinoa is a seed but is considered a whole grain though it is the same family of foods such as spinach and beets. The grain is mostly sold in health food stores.

The Quinoa plant has bright green leaves and produces bright red flowers. The plant then produces seeds which make Quinoa. The seeds look like small beads and are brown or reddish brown in colour.

When cooked, Quinoa has a nutty taste that is quite pleasing to the palate.

The nutritional value of Quinoa

* Minerals such as phosphorous, calcium, magnesium, copper, manganese and zinc

* Vitamin E and B vitamins

The origins of Quinoa

The whole grain was first cultivated in South America in the steep mountains of Peru and Bolivia. The Inca Empire grew Quinoa as a main staple food, and was favoured for its ability to grow in a variety of conditions.

It dates back to more than three thousand years ago, though its cultivation stopped briefly during the invasion of Central and South America. It was later restored and is now grown in many regions.

The demand for Quinoa has increased in recent years because its wheat free, and a good alternative to starchy grains.

There are two common types of Quinoa, red and white, which when cooked look like they have little curls.

Quinoa contains a lot of fibre which helps to rid your body of waste and unnecessary fat.  The fibre makes you feel full for longer, reducing the number of times that you nibble on snacks in between meals.

The effects of incorporating Quinoa into your diet are felt right away, especially if you have stomach or digestive problems. You’ll begin to feel lighter and more energetic as you go about your daily activities.

The fibre in Quinoa has also been linked to lower cholesterol. The soluble fibre acts as glue and combines with the bile which is then excreted from the body. The bile contains cholesterol, which greatly reduces the Total cholesterol in the body.

Quinoa contains saponins which have been used for many years to treat injuries to the skin.

Saponin is the coating of the seeds and when rubbed against the injuries, it soothes it and destroys the bacteria present.

Quinoa has been proven to treat the symptoms of fibromyalgia. This is a condition whose symptoms include fatigue, insomnia, tender points and chronic muscle pain.

The quantities of protein in Quinoa are responsible for these, because it helps in cellular health, which is the cause of fibromyalgia.

Quinoa helps to reduce bile in your body thus decreasing the formation of gallstones, which cause severe pain and blockage of the bile duct.

Quinoa is a gluten free food and is therefore recommended for people who react to wheat based products and grains.

Gives you a lot of energy

Quinoa contains iron, which helps to transport oxygen to the various cells in the body as well as the muscles. The more oxygen available, the more energetic you feel.

The iron also helps with regulation of body temperature and increasing brain function.

Quinoa is rich in the mineral magnesium, which helps the blood vessels in your body to relax. This in turn helps to protect you from migraines.

The Riboflavin in the grain helps to improve the utilisation of energy in the brain cells, which reduces the frequency of migraine attacks.

Quinoa contains heart healthy monounsaturated fats, which unlike other foods which loose these when cooked, Quinoa retains its fats when cooked.

Quinoa produces triglyceride concentrations, which help to lower the risk of heart disease.

Quinoa contains almost twenty per cent of your required daily intake of fibre. The grain is easily digested and the fibre content ensures that your digestive system works efficiently protecting you from the numerous disorders associated with a faulty gut.

Quinoa has been shown to manage the symptoms of Type two diabetes as well as:

* Because it helps you to feel fuller for longer periods, Quinoa helps to suppress hunger, helping with weight, a problem many diabetic sufferers struggle with.

* Helps to maintain normal enzyme activity as well as lower the levels of the by-products of oxidation.

Of all the grains that you consume, Quinoa contains the highest amount of the mineral potassium. Potassium balances the levels of sodium in the blood and maintains lower blood pressure.

To incorporate Quinoa into your diet, simply replace it with rice in any of your meals. To cook Quinoa:

* Measure out a cup of Quinoa into a cup

* Rinse it thoroughly in cold water

* Boil two cups of water into a pan

* After fifteen minutes, the Quinoa should be tender and ready to be eaten

The main concern associated with Quinoa is the coating. The coating is a chemical compound known as saponin which can be used to treat skin injuries.

However when eaten it has a bitter taste and more than that, it can cause stomach irritations. To avoid this, rinse the Quinoa before cooking it under running water until the water becomes clear.

Quinoa is a gluten free food and rarely causes allergies; however, it does contain oxalates which can have an adverse effect on people on oxalate restriction diets.