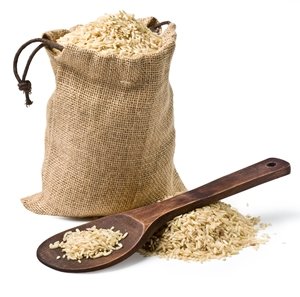 Brown rice is known as a health food due to the way it is prepared after harvesting. The process of preparing brown rice involves removing the husk, which is the outermost layer, and then leaving the rice intact.

It contains its fibre as well as the germ where most of the rice nutrients are stored.

White rice on the other hand undergoes further processing, where the bran is removed, to make it easier to cook. That refining process rids the rice of vitamins and minerals.

The nutritional value of brown rice

Brown rice is low in cholesterol, sodium and cholesterol and high in:

Where did rice originate?

Rice was grown in China about six thousand years ago, though some evidence shows that it may have been cultivated in even earlier years.

For a long time, rice was a staple food in Asia, and then its use spread to Greece and India. It reached Spain through warriors out to conquer new worlds and then it reached Southern America in the seventeenth century.

Lower the risk of cancer

The manganese present in brown rice, works to arrest free cancer causing radical in your body.

Selenium is particularly associated with lowering the risk for colon and prostate cancer. The fibre in brown rice also helps to further lower this risk as well as lower the risk for women against breast cancer.

The mineral selenium does several other things to reduce your risk for contracting cancer such as:

Brown rice is a whole grain, which means that is a carbohydrate, however, unlike refined carbohydrates; it contains a lot of fibre which leaves you feeling full for a long time. The fibre also aids in weight loss by encouraging regular bowel movement and metabolic activity.

The tissue surrounding the grain of brown rice contains a healthy component, which helps to halt the hardening of the arteries and the development of high blood pressure.

Magnesium in brown rice is a mineral known to regulate blood pressure and remove sodium from the body.

Phytonutrients present in brown rice protect from heart disease as well as a host of other illnesses.

Brown rice is easily digested by the body because of its high fibre content, which deter the growth of candida microorganisms. The rice is also ideal for people under treatment for candida yeast infections because it contains no sugars and little starch.

Helps with management of diabetes

Vitamin B and the manganese in brown rice help to accelerate the metabolism in the brain. Calcium too helps by preventing the sudden rise of sodium into the nerve cells and by doing so, the nerves and muscles remain relaxed.

Essential amino acids present in brown rice, such as glycerine and glutamine contain anti-depressant qualities, which reduce anxiety and depression.

Helps to reduce the risk of contracting Alzheimer’s disease

When incorporated into your diet, it also helps to prevent other diseases such as dementia and amnesia.

When the digestive system is healthy, your body is not prone to digestive disorders such as constipation and irritable bowel syndrome.

The natural occurring oils in brown rice help to maintain healthy cholesterol levels. The fibre present also lowers bad cholesterol when the liver removes bile from the blood (as a result of a good digestive system), to create more bile acid.

• One concern of brown rice is its best by date. It contains essential oils that grow sour after six months. Unlike white rice which can keep for up to ten years, brown rice has a much shorter shelf life. To combat this, ensure that you buy brown rice that is recently produced and do not keep it for more than six months.

• Another health concern with brown rice is that because its nutrient rich, when it is kept in the fridge for more than four days when cooked, fungi and bacteria can easily grow in it.

An amino acid that is present in brown rice, when it overstays uneaten in the fridge, can cause apoptosis, a condition characterized by tissue and cell damage.

To counter this and reap the health benefits of brown rice, consume it in at least three days and throw away leftovers.

(This page was viewed 492 times today and shared 1 times)