“Islam” is an Arabic word that means “acceptance,” “surrender,” “submission,” or “commitment,” and is closely related to the Arabic word for peace (salaam; in Hebrew, shalom). Adherents of Islam are called Muslims, literally, those who make peace. Muslims are those who surrender to the will of Allah (Allah, in Arabic) in every aspect of their lives and enjoy the resulting peace with Allah and each other. The prophet Muhammad gave the name Islam to the religious movement he founded.

There are several events that could be considered the beginning of Islam, including the life of Muhammad, or the Hijra. If we seek the beginning of Islam in a sacred event, then perhaps it lies in the Night of Power (laylat al-qadar), when Muhammad received the call to be Allah’s messenger. This page briefly sets the context for this decisive event, and notes its essential meaning in Islam.

In the Islamic worldview, the origins of the faith lie in Allah’s initial creation of the universe and everything in it, including the First Parents, Adam and his wife. For a time, all creatures lived in perfect peace, but then the First Parents were tempted by Iblis and disobeyed Allah’s rules. As a result, Adam and his wife were banished from Paradise, though Allah reassured Adam that the banishment was temporary. Allah promised to send messengers to Adam and his progeny, and these messengers would bring Allah’s guidance. Adam was reassured that those who follow Allah’s guidance will have no reason to feel fear or grief (surah 2:31-38).

One of Allah’s most important messengers was Abraham (Arabic, Ibrahim), who was called by Allah to leave his home in Ur (in present-day Iraq). Abraham (whose name means “Father of Many Nations”) is revered in the scriptures of Judaism, Christianity, and Islam as the ideal model of pure faith in the one true Allah.

Abraham’s Islam was exemplary. He followed Allah’s instructions in everything, and was even willing to sacrifice his own son because Allah had commanded it. The sacred story of Islam tells of how Abraham and his son Ishmael (Arabic, Ismail) built the Kaaba (literally “House of Allah”) in Mecca, the center of Muslim worship. 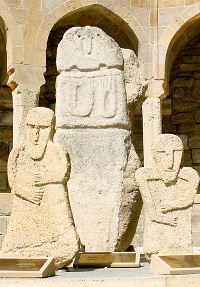 Muhammad, the final messenger sent by Allah, belonged to the Quraysh, the tribe that controlled the sacred sites of Mecca, including the Kaaba. At the time of Muhammad’s birth, ca. 570 C.E., the culture of the Arabian peninsula was generally animistic and polytheistic. Shrines with idols proliferated, especially in Mecca. The Kaaba was filled with idols that had been placed there by the different tribes and clans of Arabia. Allah, which means quite simply “the Allah,” was the highest Allah, but only one among many.

Still, monotheism was not unknown, as there were Christian and Jewish tribes in Arabia. They too had received guidance from Allah’s messengers, recorded in sacred writings such as the Torah (Moses), the Psalms (David), or the Gospel (Jesus). They were “People of the Book,” or people who possessed sacred scripture.

But from the perspective of Muhammad and his followers, Allah’s message in these scriptures had become corrupted, whether by time or self-interest. A fresh revelation was needed, one that was incorruptible, and Muhammad was called to deliver it. Although Muhammad was a prophet to the Arabs of the 7th century, the message was timeless and intended for all humankind. It was Allah’s final revelation, and thus Muhammad is called the last prophet, or Seal of the Prophets.

This revelation, which was to become the foundation of Islam, had its beginning in the Night of Power, which many traditional accounts date to the night between the 26th and 27th of Ramadan, the ninth month of the Muslim calendar. Muhammad often went to the caves of Mt. Hira near Mecca for solitary meditations and vigils, and on this night, he experienced a profound and disturbing vision. 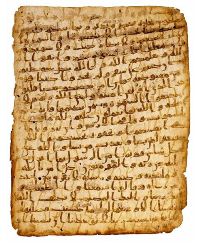 There are several versions of the story. They differ in the details, but the meaning is the same. An angelic being, later identified by Muhammad as Archangel Gabriel, appeared to him and commanded him to “recite” in the name of Allah. Muhammad did not respond immediately, and the angel took him by the throat and shook him as he repeated his command to “recite.” Again Muhammad did not react, so the angel choked him until Muhammad agreed to do as he was told. So began Muhammad’s years as a prophet, first to the Meccans and ultimately to all of Arabia.

This decisive event took place when Muhammad was forty years old, ca. 610, and the revelations continued until his death in 632. The Quran is the record of the messages Muhammad recited in the name of Allah. It forms the basis of the religion of Islam, which by the time of Muhammad’s death had united nearly all the people of the Arabian peninsula into a single polity with common beliefs and purpose. And it is the inaugural event for the establishment and spread of a religion that is now the second-largest religion in the world, with over one billion followers.

Muslims live in almost every country in the world, and are the majority in forty-eight countries stretching from north Africa to southeast Asia, with the greatest populations concentrated in south Asia and Indonesia. Despite the great diversity in languages, customs, lifestyles, and beliefs, Muslims share their love for the messenger and dedication to the message.

(This page was viewed 124 times today and shared 1 times)