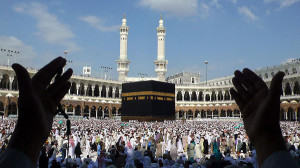 The annual pilgrimage (Hajj) to Makkah is an obligation once in a lifetime for those who are physically and financially able to perform it.

About two million people go to Makkah each year from every corner of the globe. Although Makkah is always filled with visitors, the annual Hajj is performed in the twelfth month of the Islamic calendar.

Male pilgrims wear special simple clothes which strip away distinctions of class and culture so that all stand equal before Allah.

Pilgrims pray at the Haram mosque in Makkah. In this mosque is the Kaaba (the black building in the picture) which Muslims turn toward when praying. The Kaaba is the place of worship which God commanded the Prophets Abraham and his son, Ishmael, to build.

The rites of the Hajj include circling the Kaaba seven times and going seven times between the hillocks of Safa and Marwa, as Hagar did during her search for water.

Then the pilgrims stand together in Arafa and ask Allah for what they wish and for His forgiveness, in what is often thought of as a preview of the Day of Judgment.

The end of the Hajj is marked by a festival, Eid Al-Adha, which is celebrated with prayers.

This, and Eid al-Fitr, a feast-day commemorating the end of Ramadan, are the two annual festivals of the Muslim calendar.

(This page was viewed 18 times today and shared 1 times)